The most recent group online coaching meeting (July 21, 2020) hosted by Dr. Tro’s Medical Weight Loss & Direct Primary care centered its discussion around weight-loss deception and the battle with the number on the scale. We discussed a recent blog post by Health Coach Amy Eiges, in which she described a harrowing experience with “that evil metal box”. We also discussed other topics, including recovering from a cheat meal, cheat week, cheat month or getting back on track after a long-time layoff.

Dr. Tro Kalayjian, DO, and Health Coaches Amy Eiges and Brian Wiley spent a significant portion of the meeting discussing options and strategies on how to recover and to be kind to yourself, as well as how to use these moments as learning experiences instead of treating them as failures.

The Group Coaching meetings are held every Tuesday at 5:30 p.m. EDT. To register, sign up here.

The more than 50 participants on the Zoom call heard Tro, Amy and Brian talk about their personal experiences with these situations and ways in which they dealt with them. Practical strategies and defenses were also presented, and suggestions were given to avoid letting these situations get out of hand and result in a derailment of progress.

Amy went into detail on her recent battle with the scale and provided great insight on how to look past the number and analyze other metrics that are far more important. The number on the scale rarely tells the whole story. Brian shared an experience he had overindulging in keto treats that started off as a holiday replacement, but spiraled into a six-month daily habit.

Dr. Tro shared some very interesting studies in his weekly scientific discussion. One study showed how a low-carb diet reversed fatty liver in just nine days and another showed how switching out sugar for starch can resolve fatty liver quickly. Another study showed how the ketogenic diet can reverse fatty liver in as little as six days, and another revealed that four weeks of low carb can reverse metabolic syndrome. Tro also illustrated the powerful effects of intermittent fasting and how it works.

“These studies demonstrated how fatty liver and metabolic syndrome can be quickly reversed,” said Dr. Tro. “it’s important to realize that ‘cheating’ should not be viewed as a moral failure, but something that can be course-corrected quite easily and quickly.”

The following studies were shared during the meeting:

The following key messages were emphasized:

Participants had the chance to ask questions (directly on the Zoom call, in advance via email, or through Zoom chat), and Amy, Brian and Dr. Tro took turns responding. The participants, along with Dr. Tro, Amy and Brian shared victories, struggles, strategies and insights on their own journeys. Some of the highlights included:

The topics to be discussed at the July 28 meeting include:

Here’s how to join the Group Coaching Program:

You can sign up for the Group Coaching program now for just $10 per month. For a one-time cost of $150, first-time members will benefit from an introductory one-on-one session with a health coach, and receive a general plan and a scale. Upon signup, you will receive access to the weekly online teleconferences, and all the benefits of working with our experienced, knowledgeable, and certified group coaches.

About the Health Coaches:

Amy Eiges is a health coach and reformed chronic dieter who is passionate about helping others recover from the diet-binge-gain-shame cycle she struggled with for years. Since discovering a ketogenic and low-carb lifestyle, she has lost over 180 pounds and has both reversed pre-diabetes and resolved lifelong depression. “When I was just starting out, facing 200 pounds to lose seemed insurmountable, and the idea I would ever be where I am now was unfathomable. Know this: I am not extraordinary. I just finally got the right advice, put one foot in front of the other and didn’t look back. I know now that it can be done, but after battling this war for 40 years I had lost hope that it was really, truly possible. I am living proof that it is.”

Read more about Amy’s story and struggles with food addiction and chronic dieting (“I Am Not Broken”). She also recently wrote a blog entitled “Weathering the Perfect Storm“.

Amy was the featured guest of Episode 84 of the Low Carb MD podcast, and more recently starred in Episode 136 of The Adventures of Keto Woman, a podcast with Daisy Brackenhall.

Brian Wiley is a Certified Health Coach who has struggled with food addiction and battled with obesity for most of his life. Being advised with mainstream approaches as his solution, along with the standard, “eat less, move more” resulted in minimal, or no success with eventual regain. In 2009, he reached his highest weight of 265 pounds. His doctor advised and encouraged him to take medications after his blood glucose, blood pressure and cholesterol reached dangerous levels at the age of only 35.

His commitment to a low carb lifestyle resulted in a 100-pound weight loss, and he was able to reverse his abnormal health markers improving his heart health and avoiding type 2 diabetes. Brian has maintained his weight loss for the last 11 years. “I see people everyday on social media and in real life and they’re struggling. They’re going through the same struggles of food addiction, unhealthy eating patterns, and unsuccessful dieting like I did. I want to serve as an example that this approach can be successful. It is not a fad, and is a healthy long-term lifestyle solution.”

Brian is also an ACE certified personal trainer. Brian was a featured guest on Episode 29 of the Low Carb MD podcast. Recently, Brian was featured in an interview on the Diet Doctor website. The interview was a follow-up to an interview published in 2017. 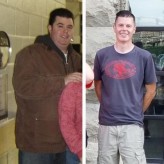